I wrote the original posts about this quilt here

and again here when it was finished.   It finally has a sleeve and a label and is being shipped off to the ” Stretching Art and Tradition” group exhibit  that will be shown at the Pennsylvania National Quilt Extravaganza in Philadelphia, PA in September.  I’ve never shown a full picture of it so thought I would show it here.

There were a few issues doing this. First of all the quilt was washed so the batting shrank and it had that soft lived in look. I decided to paint before blocking  reasoning that it would get wet and crinkle up all over again. Of course then the paint wouldn’t go on evenly. I could see this being a problem with some things but since this was an out and out experiment I just went for it. I was happy with how it turned out and that the quilting lines and crinkles added a nice design element.

Its still a little wonky and is drying after being blocked so the final photo will get done later today before shipping it off. 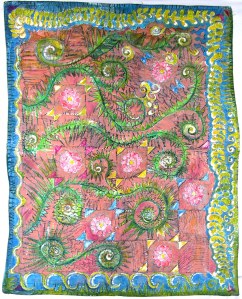